SGA Awards recognizes individuals who have displayed courageous actions to save or attempt to save lives.

On the evening of Wednesday, Jan. 20, Gas Supply Trader Beau Tichenor was driving to his wife’s parents’ house to pick up the couple’s 4- and 2-year-old children, who had been in class all day. At a stop sign on a bridge atop a drainage canal, Tichenor suddenly saw an SUV inexplicably turn right and head down a steep embankment and into the water.

“I was totally shocked by what I was seeing,” says Tichenor, a 12-year employee. “The nose of the vehicle smashed into a metal culvert at the bottom of the canal and flipped over. The passenger compartment of the SUV was underwater.”

Tichenor parked his vehicle and was preparing to call 911 when he saw another motorist calling the emergency number. Tichenor quickly scaled down the embankment and into the waste-deep canal water. He pulled on two side doors, which were locked.

“I was getting ready to break a window under the water when I discovered an open window that was apparently rolled down,” he said. “I started feeling around in the front seat and dashboard but could not find a person. By then, another gentleman had come down and I told him, ‘I can’t find anybody in the car.’”

The vehicle was buoyant, so the two men started gently rocking it back and forth. Suddenly, air bubbles emerged from the left side of the car and the driver’s head popped up.

“We pulled the man onto the undercarriage of the overturned vehicle, and I asked if anyone else was with him,” Tichenor said. “He was having trouble breathing but fortunately was able to answer no.”

The two men stayed with the injured motorist until the EMTs arrived. Emergency personnel slid a ladder down the canal embankment. Two firefighters then pushed a floating backboard over to the upside-down car, moved the man onto the stretcher and floated him to the ladder. Emergency personnel then slid the strapped-down driver up the ladder and into a waiting ambulance.

A few days later, through social media, the man’s wife and daughter were able to locate the two gentlemen who saved their husband and dad.

“They were very grateful for our help and said the man had no broken bones and had recovered and was expected to return to work soon,” Tichenor said.

Atmos Energy provides monthly safety training to all employees that consists of CPR training, personal protection tips, safe driving best practices, and day-to-day scenarios, and it fosters a company culture that promotes keeping our employees and the 1,400 communities we serve safe.

Validating our approach, Atmos Energy was named to Newsweek’s 2021 list of America’s Most Responsible Companies based on publicly available key performance indicators presented through our CRS Report and an independent survey. Newsweek conducted a detailed analysis beginning with a pool of over 2,000 companies that were screened by a variety of criteria. Then an independent survey was conducted among more than 7,500 U.S. residents along with research-based on publicly available key performance indicators derived from Corporate Annual Reports, CSR Reports, Sustainability Reports, and Corporate Citizenship Reports. 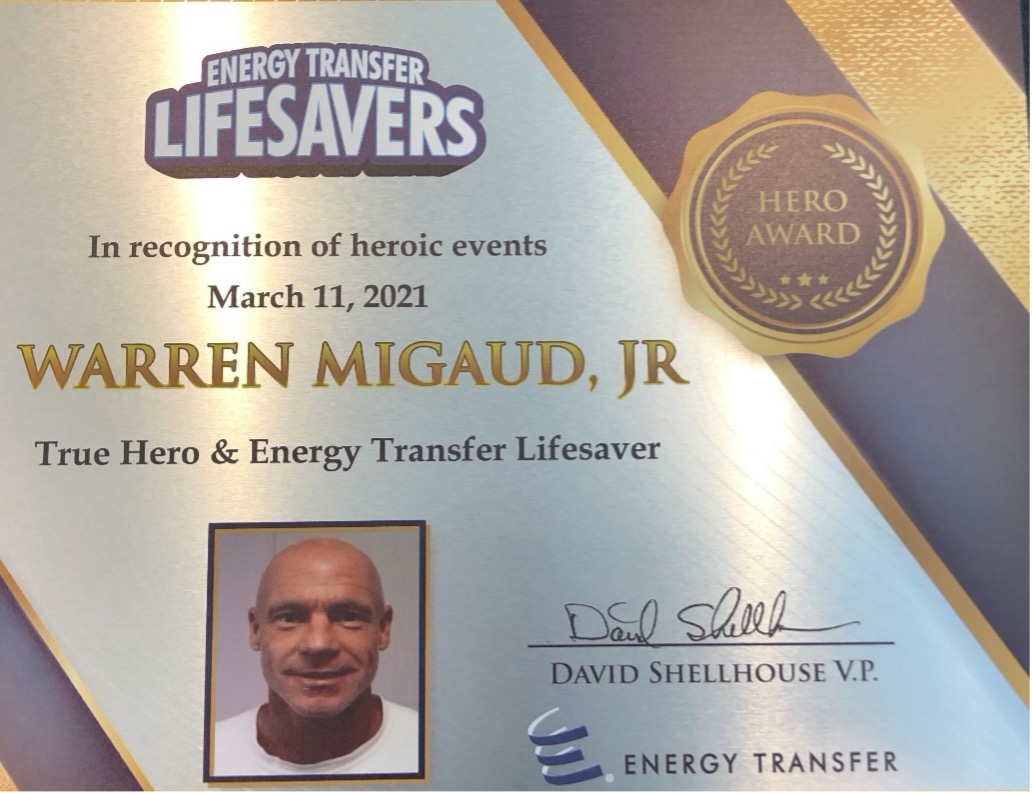 Warren Migaud Jr. – Lifesaving story
A smart guy told me one time the challenge with a lifelong commitment to safety is you that will never really know the things you do that make a difference in people’s lives and you will spend most of your time investigating and dealing with the things that did not go right. That was not the case yesterday for Warren Migaud Jr. (Mechanic – West Palm Beach).

Warren came upon a terrible accident along the Florida Turnpike on the way to work Thursday 3/11/21. He noticed a large F450-style truck rolled over and on fire but no one around. As I am sure many of us have observed in our travels, other vehicles traveling down the Turnpike moved around the accident headed to their daily destination thinking, “I hope folks are ok.”

Not Warren, once he was safely by, he pulled to the median and grabbed his fire extinguisher and ran back to the truck. Surprisingly the windows were not broken, and the truck cab was full of smoke from the fire. Warren could not tell what was going on inside, but he heard voices calling for help.

Warren got a maul from his truck and broke out a couple of windows so he could discharge the fire extinguisher. There was a guy in the truck whose legs were on fire. By this time other people saw what was going on, some stopped and brought additional fire extinguishers. Warren discharged multiple fire extinguishers and was eventually able to get the fire out and cut the passengers’ safety belts to position them for fresh air. He washed their faces and stood by to comfort and support them until emergency responders arrived. The passengers were not able to be extracted from the vehicle until the fire department arrived on the scene in about 15 minutes with the jaws of life. Two men lived through that event who would not have had a chance without Warren taking matters into his own hands and making a difference. Two other passengers did not survive the accident.

Warren truly is an Energy Transfer Lifesaver and I am proud to know that I am a part of this team every day.

On the morning of February 16, 2021, Mr. Brayden Drew was dispatched to a customer service order at a residence in Shawnee, OK. Upon completion of the order, Mr. Drew returned to the residence and observed a female customer coughing, gasping for air and demonstrating the universal sign for choking. Mr. Drew took immediate action and performed the Heimlich maneuver on the distressed resident. Because of his recognition and ability to act quickly, he successfully dislodged the food that was responsible for the obstruction. After clearing the airway, Mr. Drew then called 911 and remained with the customer until EMTs arrived. The customer described the situation and Mr. Drew’s response by stating “I choked on a piece of toast and Brayden had to perform the Heimlich maneuver on me…He was very professional and kind. I just am so glad he was there and was able to handle the situation with such grace. Thank you for having such a caring young man on your staff. I hope you can recognize him.” 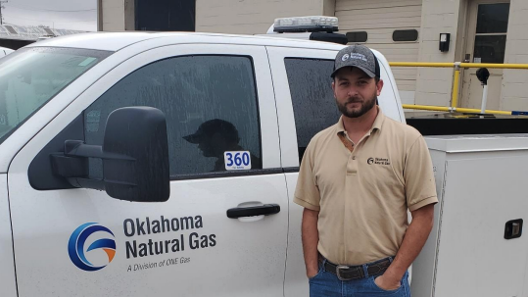